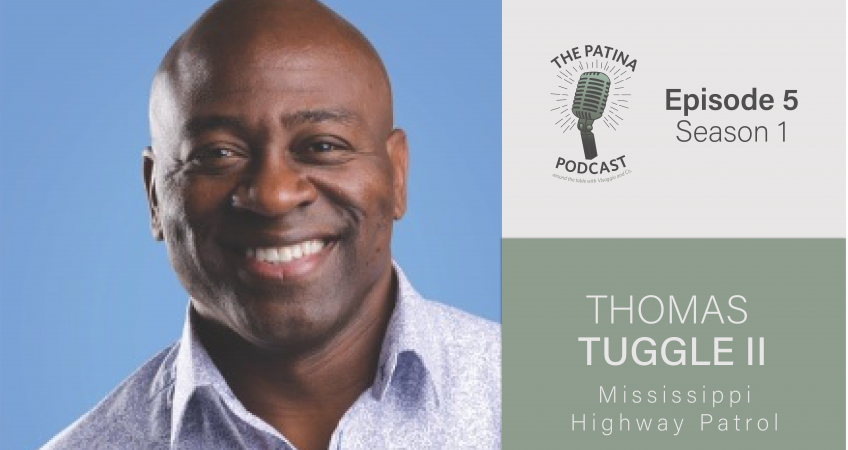 It was an amazing opportunity to sit down speak with Thomas Tuggle, Lt. Colonel with the Mississippi Highway Patrol, about his experience as the Director of the Mississippi Law Enforcement Officers’ Training Academy, the largest law enforcement training facility in the state. In this fifth episode of season one of The Patina Podcast, Lt. Colonel Tuggle shares that the key to success is losing early in life, causing one to greet achievements with dignity and humbleness. It was fascinating learning how Lt. Colonel Tuggle’s recruits learn how to rebuild themselves with courage and integrity.

Tapping out is not an option in his profession; it is all in or do not get in. Under his leadership, recruits learn that pride is concerned with who is right, but humility is concerned with what is right. He shows how we can adapt this approach to life outside of the police academy and shares how one can learn, change, and improve as a leader. Tuggle guides his recruits to remove preconceived viewpoints, and forever change their lives and make a positive impact.

After a four-year enlistment, which included two tours in Japan, Thomas left the Marine Corps with the Navy Achievement Medal with a Gold Star, the Combat Action Ribbon, The Southwest Asia Service Medal with 2- Bronze Stars and four promotions (3-meritoriously). His bravery, courage, and core values are something to be admired. Lt. Colonel Tuggle volunteers in teen intervention programs for substance and alcohol abuse sharing his knowledge of transforming failures into successes. We need more “Thomas Tuggles” in the world and are thankful that he is becoming an increasingly sought after voice and leader in today’s volatile world. Join us around the table at the link below.

Do you have a leader we can learn from? Send your suggestions to [email protected].

Let us tell your story.